Paul Hollywood is a fucking liar

I have some bad news: we live in the sort of world where mahogany love rat and actual living thumb, Paul Hollywood, is regarded as some sort of bread expert.

He certainly talks a lot about bread, he knows how to eat bread, he even has a book called "Bread"; but Paul Hollywood is a charlatan, propped up by a shadowy cabal of lazy researchers, laughing all the way to the goddamn bread bin.

Bread: The Book of Lies

Paul Hollywood's "Bread" is a book filled with half-truths, propaganda, outright lies and plainly stupid fucking ideas. An exercise in automatic writing that shows little regard for objective reality - not one of his recipes can be executed, as described, without suffering a minor ordeal. For one of Paul Hollywood's recipes to be a failure could be considered unfortunate, for all of them to be would seem to be a deliberate act of sabotage.

Sabotage targeted at me, specifically.

Setting the tone for the Kafka-esque trip into the absurd he has planned for the unfortunate reader, Paul opens with this gem...

"Most beginners don't knead for long enough. [...] To test when you've kneaded enough, tease and pull out a piece of the dough between your hands: it should be able to stretch to 20cm without breaking."

Here, Paul Hollywood invents an entirely unorthodox system of judging how soft something is: trying to stretch an arbitrarily sized ball to 20cm. Does Paul Hollywood know how long 20cm is? Does he care how big a "piece" should be? Has Paul Hollywood ever HANDLED BREAD?! 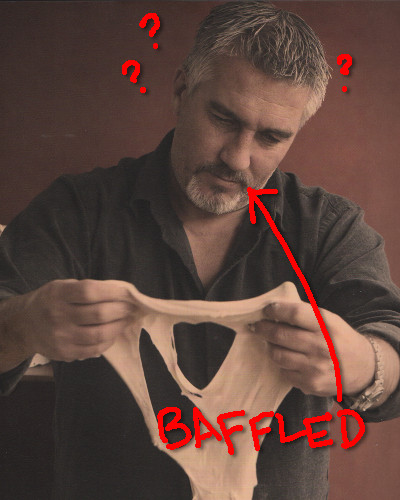 The first recipe proper culminates in this pearl of Aristotlean wisdom:

"Put the dough in a lightly oiled large bowl. Cover with cling film and leave to rise until tripled in size - at least 1 1/2 hours, but it can take up the 3 hours depending on the temperature."

Triple in si... TRIPLE in size?! The only place that dough is tripling in size in 90 minutes, Paul, is inside a fucking oven.

The book unfolds in this fashion, gently waterboarding you with barely credible facts and tips in a manner designed to create a state of suggestibility in the mind of the reader. If this approach seems familiar it's because it's the same technique employed by interrogators, fascist dictators and cult leaders.

This Swiss roll into madness culminates in Paul Hollywood's single greatest attack on the discipline of baking (and Italian culture) - ciabatta.

Paul Hollywood is a Racist

Ciabatta is a famous and distinctive bread that, usefully for someone writing a recipe book, was invented a mere 30 years ago! There are dozens of contemporary sources for its creation, including interviews with the creator! Of course, that won't stop Paul Hollywood's quest to spunk a completely useless rope of words into the shape of a book and publish it for dirty, filthy cash.

According to Bread Hitler, a ciabatta is as easy as making a very wet dough in a plastic tub, tipping it out after it's risen, cutting into two and baking.

Following these steps will produce a loaf almost, but not quite entirely unlike ciabatta. With a uniform, tight texture and completely, inedibly deflated; Paul's ciabatta is far closer to its namesake slipper than any bread ought to be. In fact, I wish Paul Hollywood would slip over in the street and land arse-first into an arse trap.

Making actual ciabatta is a straightforward, if involved, process: the flour needs to be allowed to soak for half an hour, the wet poolish allowed to bloom overnight, at all stages the bread must be handled carefully to avoid accidentally deflating it and importantly...

YOU NEED SPECIAL TUBES TO MAKE IT IN

What? Did that slip your mind, Paul? Were you planning on telling me that before or after I attempted your stupid recipe SIX TIMES, PAUL? You fucking FUCK PRICK BREAD BASTARD ARSEHOLE.

No Justice for Me Men

This food terrorist carries out his sinister actions without a care for the damage he will cause to generations of bakers, deploying his perverse work into the civilian populations of the United Kingdom like some sort of bread land mine. A naan-mine, I suppose.

In a just society, men like Paul Hollywood would be given a constructive outlet for their sociopathic urge to tell people how to do a bread wrong. Perhaps he could be employed as a rogue agent, sowing discord across the Middle East by handing out pamphlets about how you can make flatbreads dead easy if you staple a yoghurt to a sponge soaked in fermented rat piss, or something?

In the real world, though, we must look for a pragmatic compromise - I propose that until he successfully bakes any recipe from his book: once an hour, on the hour, Paul Hollywood is shot in the face with a Gatling gun.

His crumpet recipe is pretty reliable, though. Thanks, Paul. Yum yum!